The Manipur Chakra also known as solar plexus resides just above the Swadhisthan chakra and slight down the Anahat chakra within navel area. The Manipur chakra is the center of bio electricity.

People of modern age may assume its location as adrenal glands place. This chakra is surrounded by ten petal, each petal with specific seed letters.

The second name and English name of this chakra is Solar plexus the name suggest that this chakra is the power house of energy. The sacred sound that is ‘RAM’ for this chakra is clear manifestation of the humbleness, contentment, love, broadness, clarity of mind, courage, wisdom and many humanitarian virtues.

All the petals associated with this chakra represent the different tendacies including desires, jealousy, treachery, shame, delusion, fear, foolishness, disgust and sadness respectively.

These habits or the emotions are sign of ignorance covered around this solar plexus. These are like a dark black cover over the knowledge. 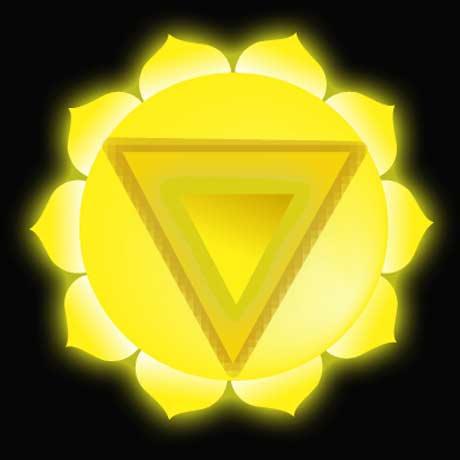 The place of Manipur Chakra in physiological term

There is certain level of similarity between the yogic scripture’s aphorism and modern physiologist.

The scriptures say that Manipur is the center of vital force while doctor proved that adrenal is responsible for energy transformation.

Doctors admit that on some certain moments or in particular situation the adrenal gland makes stranger secretion of hormones which results in incredible energy.

Awakening of Manipur Chakra and its impact on body

In Kundalini yoga, there are various kinds of meditation techniques and pranayam have been described for awakening the power of Manipur chakra.

Going through right techniques under the authorized supervision, the Manipur chakra is awakened.

When this chakra is awakened, the aura within the body is generated. This is the source of vital forces.

That is why when this chakra is meditated upon; entire body gets vital energy and superfluous powers starts to circulate within the body.

The distractive emotions of mind like desires, jealousy, treachery, shame, delusion, fear, foolishness, disgust and sadness are fully vanished through the light of this chakra.

And in addition, a man becomes wise, content, trustful, fearless and rational. And many qualities are achieved when this chakra is awakened.